Warning: Aboriginal and Torres Strait Islander readers should be aware that
this document may contain images or names of people who have since passed away.

When I was visiting Melville Island in 2004, the locals told a story about a Japanese pilot whose plane went down over Melville during the war. The story has it that the pilot was found by local (Indigenous) women, who had been out in the bush, and they had him carrying round one of the babies. Having been warned about the potential of Japanese invaders, they alerted one of the local men, who then handed the Japanese pilot over to the Australian military. They made all sorts of jokes about the convenience of having had him as a babysitter. My experience of the people during that visit was that they were warm, had a strong sense of their Tiwi identity and a very good sense of humour!

Before going to the island, I had read in a history of the Tiwi Islands about a Japanese pilot, Toyashima Haijame, who was downed in 1942 – I believe it was on his way back from the bombing of Darwin, but I hadn’t realised until recently that what I’d read was part of the same story.

I was trying to find out more about Matthias Ulungura, who is accredited with being the first man to capture a Japanese prisoner of war on Australian soil. In early official accounts of the incident, he is just “an aborigine” (note, too,  that because Islanders and Aborigines haden’t been accorded citzen’s rights at that time, they weren’t really able to say an “Australian” had captured the pilot). Later he gets a name, and he is now acknowledged as having the honour of capturing the POW. But then I came across this photo (embedded link provided by site): 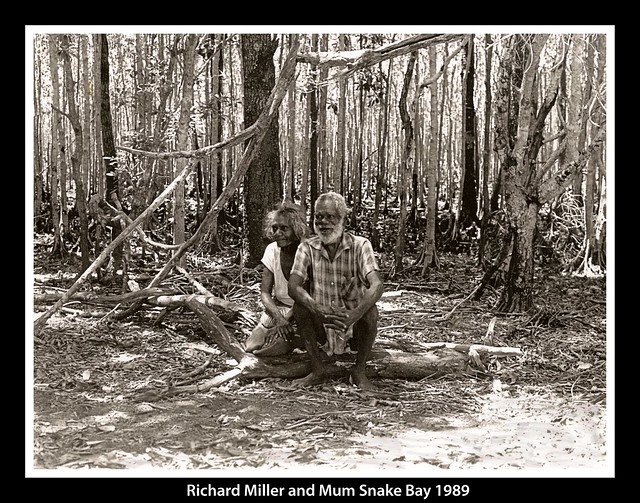 It shows a picture of Richard Miller and his mother at Snake Bay, Milikapiti, on Melville Island, and states that Richard was the baby that a Japanese pilot had found after crashing on the island. The baby had been wrapped in paperbark and left in the shade while the women were busy, but the pilot thought the child was alone and didn’t want to leave it. It was while he was in this dilemma that Matthias Ulungura came up behind him and captured him. The rest is well documented.

I was delighted to find that the two stories come together and that they validate each other. But I thought of the great irony that not even in this photo does the mother get a proper name, although she was presumably one of the women who actually were the first to come across the pilot, even if they weren’t the ones who bailed him up, as Ulungura did with the words, “Stick ’em up!”

Here is a link to a lovely photo of Matthias Ulungura:

Below is an image of the painting – unfortunately not a great one, because the painting is large, complex and narratively detailed. It was due to be exhibited at a gallery in Melbourne in June 2012, but due to some apparent misunderstanding about the artist’s intentions, the exhibition has been postponed. Keep your eye out for when it opens – Cameron’s works are something special and they will certainly make you think. And besides, I am a great fan of Milikapiti and Melville Island!

Postscript, 16 June 2012:
Great news – Cameron Hayes’ show will be going up in Melbourne after all!
You will be able to see his work at Dark Horse Experiment
from 2 August to 2 September 2012.

View all posts by Caty Kim

One thought on “Invisible women, Japanese pilots, and Cameron Hayes”